Foodora employees – Riders are not contractors. 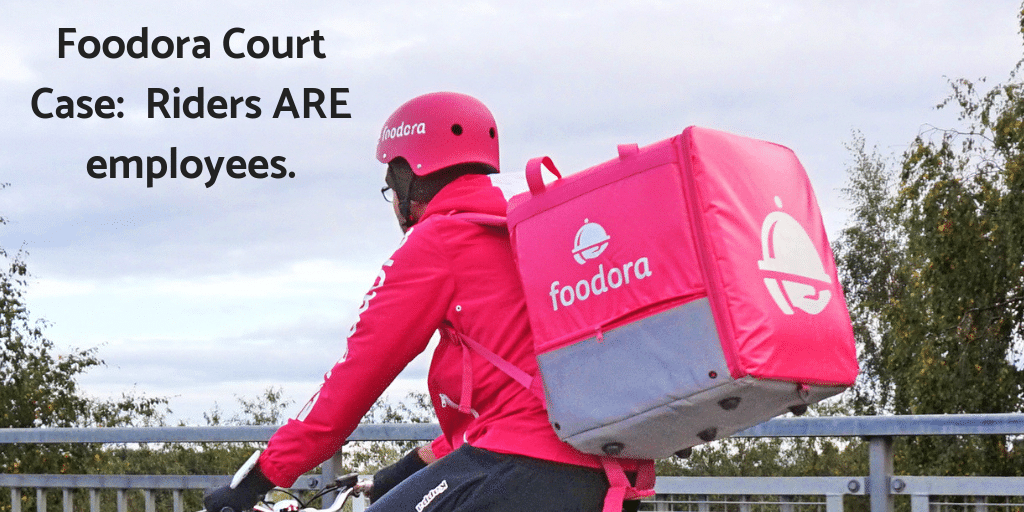 The Guardian is reporting that the administrators for Foodora in Australia have admitted that is “more likely than not” that the food delivery riders they had were employees rather than independent contractors.  This being the case – they have been underpaid $5,000,000 in wages.  This has come about after the release of a report from administrators stating that the workers were wrongly classified as independent contractors.    Some riders were earning as little as $6 per hour.  Foodora now believes that the majority of riders should have been classified at least as casual workers and entitled to greater rights.

Foodora administrators admit that their riders in Australia were employees.

This is a significant development in the Gig Economy and a world first.

German parent, Delivery Hero, is offering to pay $3,000,000 to the creditors, which include underpaid workers, the Australian Taxation Office and various state revenue offices for unpaid payroll tax.

In the past 4 years, Foodora had lost $28.7 million in Australia.

We always believed that the Australian marketing was too small for 2 players, let alone 3 and Deliveroo and Just Eat had a significant lead overall Foodora and we wondered what was keeping them in Australia.  It appears that the imminent court case from the Fair Work Ombudsman was the impetuous for the shuttering of the Australian office.  The size of the losses and the new court action may give pause to Menulog, which is trying to emulate the business model after giving UberEats and Deliveroo a 3 year head start.

Canadian Restaurants recently reported the ongoing issues that they have with the delivery aggregators.  The impact on profitability as well as the reputational risk of the behaviours of some of the lowly paid riders creates a myriad of problems for many restaurant operators using the companies.  We believe that there is more work to be done in regard to the relationship between the rider and the Restaurant, especially when there is little control that the Restaurant has over their conduct.  This comes after Channel 9 News in Australia ran a story about a scam affecting restaurants where hungry riders are canceling orders after picking up the food.

Does this strengthen the case against UberEats and Deliveroo?

The Transport Workers Union, which is also targetting UberEats and Deliveroo believes that this strengthens the case against these companies as well. “It’s a business model based on wage theft and that is the brave new world of work,” he said. “Seventy per cent of delivery riders are visa holders, many of them students from overseas. The average age being 23, there is a responsibility for the government to pursue this company literally to the ends of the world.”

This ruling in Australia was followed by a ruling in a Spanish Court bought about by a rider fighting an unfair dismissal case.    This is the first ruling of its type in Europe and we could be seeing the start of a change to protect workers rights.

We believe that the biggest innovation the delivery aggregators have made is the ability to pay below award rates and these court cases   are showing that countries are becoming less reluctant to do nothing as an underclass of Gig Economy workers is created and take jobs from fully employed workers within Restaurants.

Deliveroo is fighting back, release an ‘independent report‘ published by Public First, a company that, according to their website, “We help organisations understand and influence public opinion through research and targeted communications campaigns. And we help businesses craft policy ideas that Governments can realistically apply to difficult issues.”  The report stated that 80% of riders say flexibility is what they like most about riding with Deliveroo.  It ignores the impact on Restaurants who are providing their own delivery service, but find it uneconomical given that Deliveroo is paying its independent contractors significantly less.

These court cases in Spain and Australia may not be the last and could represent the end of the delivery model, which would probably be unsustainable if the delivery aggregators were forced to pay award wages and provide proper conditions of employment.

Restaurants can save sometimes over $1,000 a month by not paying commission for orders coming through their own website.