Deliveroo raises $385 million – What does it mean for your Restaurant? 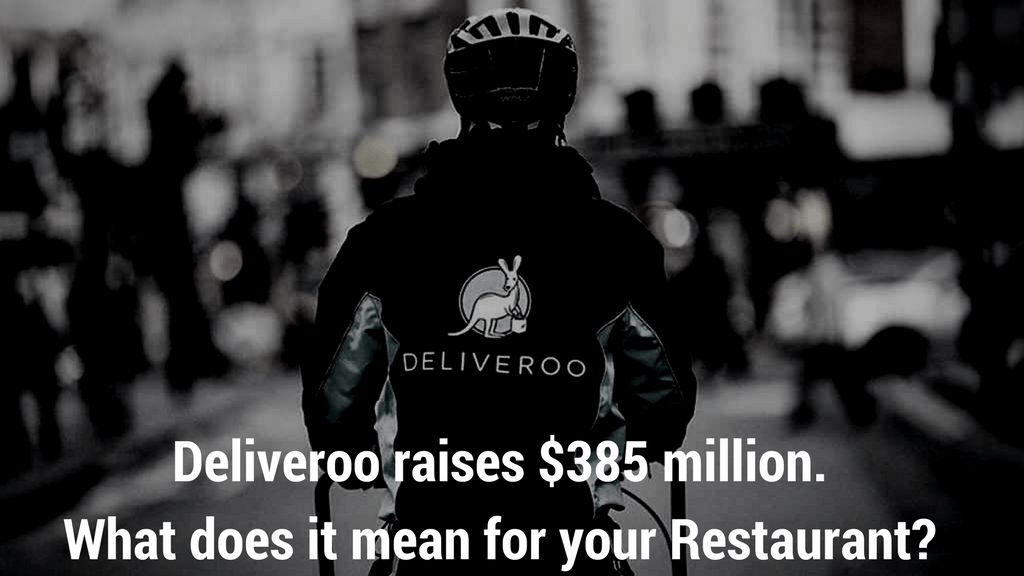 Techcrunch is reporting that Deliveroo has raised $385 million on a valuation ‘over $2 billion”.  This was a Series F round and takes the total funding for Deliveroo to $860 million.  This comes after Deliveroo released it’s Calendar Year 2016 results which revealed a £129 million loss, which was up from a £30 million loss in 2015.

What impact will the new capital have on Restaurants?

Analysis of the Deliveroo Financials

In an article with Business Insider, Deliveroo Board member Martin Mignot stated that the raw sales and costs of goods sold are a combination of mature and new markets and that the margin in mature markets are higher.  This is probably a combination of effects from better efficiencies along with the ability to extract higher commissions from the Restaurants.

The future for Deliveroo

In the medium term, Deliveroo faces challenges around the legal status of their riders.  Deliveroo maintains that their riders are independent contractors, whereas many of the now 30,000 riders are trying to claim employee status, making them eligible for sick and holiday leave.   There are also concerns that many of the riders on earning below the minimum wage.  The issue is so severe that Deliveroo even has a Modern Slavery Statement on it’s website.  A classification as workers would see riders also eligible for a minimum wage and other benefits which would significant impact the losses that Deliveroo is currently experiencing.  In the UK, the Central Arbitration Committee is investigating what the actual status of Deliveroo riders is.  In France, Deliveroo agreed to provide free healthcare to bike riders injured on the job, after protests about pay and conditions in Paris. In Australia, the Sentate Committee on Corprate Avoidance of the Fair Work Act has looked at the gig economy and sees big problems with the Deliveroo business model and the way that it remunerates riders.

Deliveroo has approximately 3 years of runway after the last round of funding, but that is assuming the losses continue at the same rate, which is unlikely as expansion will see further large increases in administration costs against a razor thin margin.

The long term, however is a lot more rosy for Deliveroo, although less so for Restaurants.  As it builds it’s monopoly, (it is crushing Just Eat in a lot of countries and UberEats is struggling to compete) it will be able to increase margins.  We also see the removal of the delivery riders as being inevitable.

Deliveroo and self driving vehicles

No analysts are yet factoring in self driving vehicles as a delivery mode for Deliveroo.  This will dramatically change the economics in favour of Deliveroo.  It may not be self driving cars, it may be restaurant delivery drones, but either way, the days of the delivery driver are limited, and possible to less than 5 years.  This will be the game changer that I suspect the investors in Deliveroo are banking on for the stellar returns that they are hoping for.

Deliveroo and vertical integration – What if they started to cook the food?

Another not insignificant risk for Restaurants is that Delvieroo spends the next 3 years shaping consumers to purchase their food from Deliveroo.  A lot of the process revolves around minimising the Restaurant’s brand and increasing the brand of Deliveroo, hence the packaging, the app and the call to action around Deliveroo.  This creates the opportunity for Deliveroo  to employee contract labour to prepare the food themselves, just in the way that Supermarkets introduced house brands.  This is especially easy if Deliveroo has access to modular and scalable kitchen infrastructure – just like…

It mentions that will continue to offer the best customer proposition, driving lower prices for customers – which is a particularly difficult proposition for Restaurants as they struggle with already thin margins.

Deliveroo plans to expand it’s Deliveroo Editions, which are extensions of existing Restaurants, except cooked in pre fab metal containers.  Many customers are unaware that the food that they are receiving is actually coming from a pre fab container, rather than from the Restaurant itself.  This will accelerate the trend towards factory kitchens which have different cost structures.  We believe that it will not be too long before we see Deliveroo Editions only Restaurants being created.  These have minimal rent, much lower costs in terms of wages and lower running costs.  From here it is a logical next step to contract out the labour in the kitchens and deliver generic cuisine based meals.

The impact on the traditional Restaurant industry could be dire.  More competition will force more restaurants to ditch the traditional dine in / take out combination in favour of the cheaper container food and as that grows in popularity, we will see the slippery slope that will lead to decreases in portion sizes and quality as restaurants struggle in the battle for margin.  The Daily Mail is reporting a growing swell of opposition to the  Deliveroo factory food, because of a range of issues:

What should your Restaurant do?

Restaurants need to have an action plan around how they best deal with deliveries.  There are a range of options, many of which can lead to higher margins for the restaurants and better quality food for the customer.

If your looking for a free Deliveroo alternative check out our Free Restaurant OnLine Ordering system.