Here is the email that I received.  I have never been to any of these Restaurants!

The email I received offering 100 “Tripcollective points” for every review I have written. I have visited none of these restaurants.

Clicking through on one of the Restaurants listed in the email takes me straight to a page where I can earn 100 “Tripcollective points”.  I am not sure if they are worth anything, but there is a clear call to action from Tripadvisor attempting to get me to write a review about a Restaurant that I have never been to.

Clicking on the email link for 1 of the Restaurants leads directly to a page where a review can be left.

I am only a few clicks away from submitting a review for a Restaurant that I have never been to.

Rating the Restaurant is quick and easy, whether you’ve been there or not.

Tripadvisor attempts to create a more detailed model of the Restaurant.  How many actual customers are qualified to rate Restaurants? 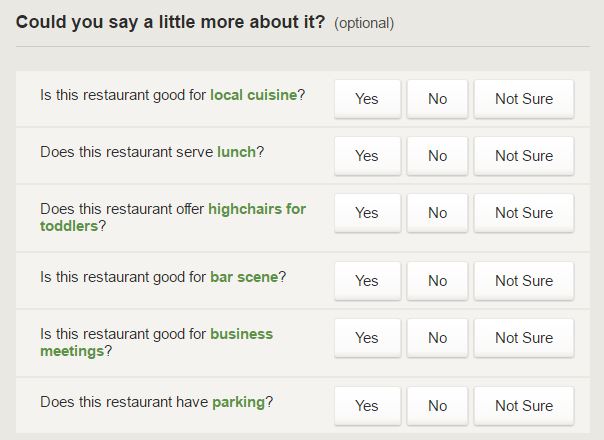 Tripadvisor also collects a range of information, some of which many restaurant guests may not know.

This one tick box for Tripadvisor Ts + Cs appears more concerned about the Restaurant paying for positive reviews, not fake reviews from competitors.

How to deal with Tripadvisor fake reviews

The issues with Tripadvisor  fake reviews are well known, with the system relatively easy to game. A newspaper in Italy even got the profile of a fake Restaurant listed as the number 1  restaurant in Tripadvisor to show how easy it was to do.

There are a couple of actions that a Restaurant can do deal with Tripadvisor fake reviews.

We saw one Restaurant in Fitzroy respond to a review which was not overly bad, but was not great either.  The essence of the review was that the “food was OK, the service a bit inattentive and the price a bit much for the amount of food.  Overall, there are better places to eat.”  The chef of the Restaurant replied, “Thank you for your feedback, that is very interesting.  We open in 1 week.”  Obviously a competitor could not even wait for the Restaurant to open before they started leaving fake reviews to bump up their own Restaurant in the rankings.  Calling the reviewer out can work, as can contacting Tripadvisor, but they can be reluctant to remove a review, just because it was a bad review.  The process can be long winded and time consuming.

One way to get around the whole Tripadvisor question is to build a number of marketing strategies that don’t need Tripadvisor.  Building your own email database, having great SEO, great Menu engineering, identifying and encouraging repeat customers, and offering great service and value are all ways that can help you to avoid the consequences of fake Tripadvisor reviews.  Remember you are after enough customers to fill your Restaurant, not all of the customers.  Not everyone reads a Tripadvisor review and there is a growing number of people who will go to a Restaurant in spite of poor reviews, because they know the system is flawed.

Tripadvisor’s business model appears to be to create revenue from Restaurants wanting to purchase advertising either through display advertising, click advertising or subscriptions from booking agents.  Their purchase of Dimmi in Australia was a part of their attempt to monetise the visitors to the website.  Dimmi charges up to $3 for seats booked through their network.  Now Restaurants are placed in the situation with the website that often has fake reviews about a Restaurant also wanting to take bookings.

Tripadvisor is trying to monetise the relationship they have with customers by clipping the ticket on Restaurant and Hotel bookings.  Once again, a restaurant that is in control of it’s own marketing can completely skip this unfair tax on their business.

Why I don’t use Tripadvisor.

Working at Marketing4Restaurants, I am lucky to travel a bit and go to a lot of different Restaurants.  I am always looking for great, independently owned restaurants.  I am often in cities which I am either new to or I have only visited once or twice, either way I am always looking for new Restaurants to try.  On numerous occassions I have tried Restaurants recommended in Tripadvisor and the food has been ordinary or worse and after a careful look at the reviews, I am convinced that the system is being gamed.  It is too easy to write a fake review, either to promote a restaurant or to make competing restaurants look worse.  The restaurants promoted are potentially paying to have higher rankings in the search results or are the beneficiary of reviews that are clearly fake.  Tripadvisor, by being so simple to game, has focused on the number of reviews and not on the actual quality of the reviews.  Either way, the lack of credibility in the reviews has meant that I am using Tripadvisor a lot less than I used to.

Sites like fiverr offer people who are prepared to write fake reviews and there are services available to provide bulk fake reviews.  These services make it harder than ever for a Restaurant to be able to compete in the open market.

A 10 second search on Fiverr found 2 people willing to write fake Restaurant reviews. I am sure there are plenty of other services out there.